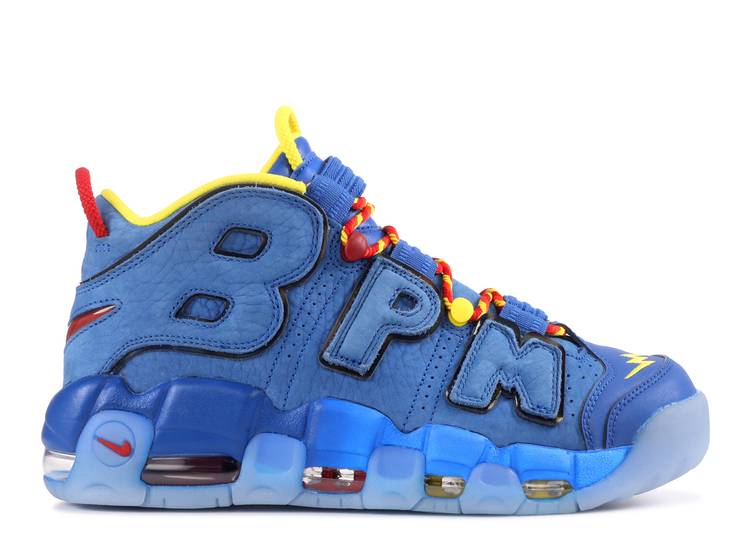 This Nike Air More Uptempo 'Doernbecher' was designed by Brody Miller, an 11-year-old diagnosed with a rare brain disorder, inspired by Brody's dreams of becoming a comic book artist. The colorway features a 'Generator Man' inspired Blue Jay nubuck upper, a Brody character produced with mind control and healing powers. The traditional 'AIR' of the shoe has been substituted with 'BPM,' which captures both Brody Preston Miller and Beats Per Minute. It also comes with Team orange and Blue Jay accents, and a glow-in the-dark outsole with the phrases 'BE STRONG.' Released in November 2017, the Nike 2017 Doernbecher Collection also included vibrant colors for the Air Jordan 12, Nike Air VaporMax, Nike SB Zoom, Nike Air Max Thea Ultra Flyknit, and the Nike Air Huarache Run Ultra.

For sneakers, you may cancel your order within 3 hours of placing it or before it is confirmed by the seller - whichever comes first. If 3 hours have passed from when you placed the order and/or the seller has already confirmed the order, then the order cannot be canceled. If neither have occurred, you can cancel your order first by accessing it via “Track My Order” or “My Account,” clicking “Cancel Order” and following the instructions.

If you checked out as a guest, you will need to create a Flight Club account.